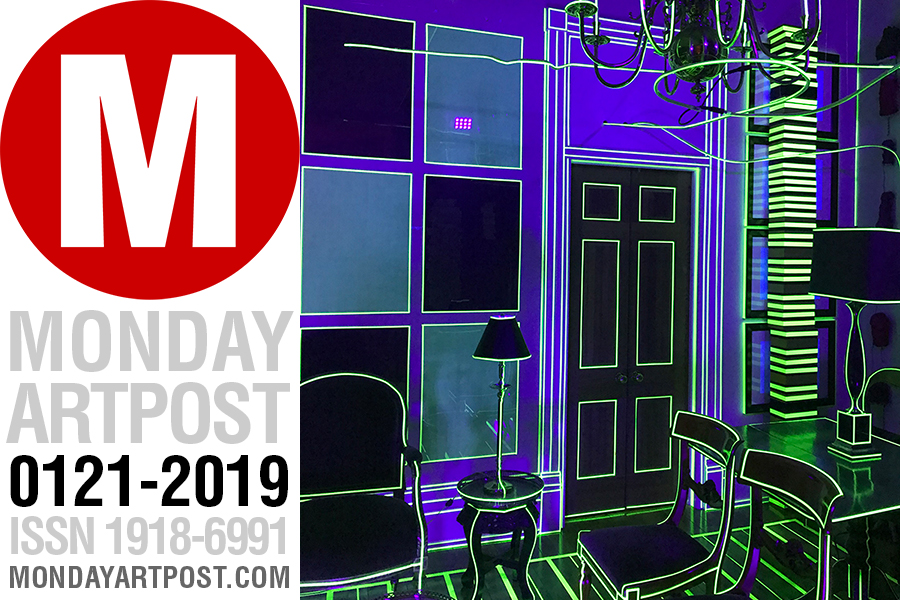 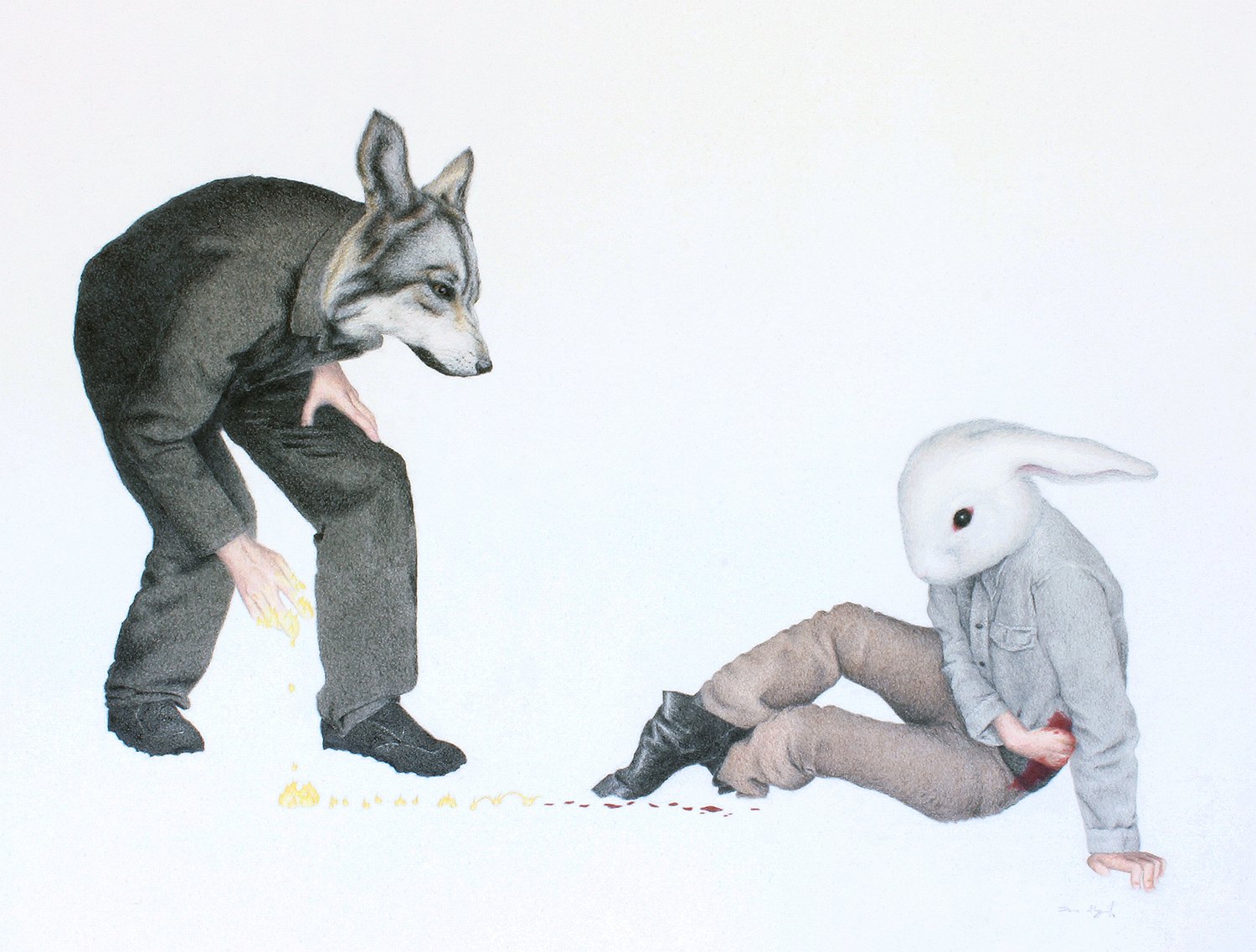 Wolf Tickets is one of my most violent pieces. Using the predator/prey relationship between wolves and rabbits Wolf Tickets is a metaphor about the violence that happens between people that sometimes leads to murder.

The title was inspired by a Tom Waits song about an escaped convict being tracked by police dogs. A ‘wolf ticket’ is something left behind that carries a scent allowing an animal to hunt its prey. The word ‘ticket’ is another way of saying ‘an invitation to be found.’ I’m unsure if Mr. Waits himself took the expression ‘wolf tickets’ from another source.

Though I never add religious themes to my work - I prefer it if people think of my work as metaphors- it was the association of wolves as hounds or ‘hell hounds’ that inspired the idea for the flaming trail of blood. The flame seeks the bloods origin no differently than the wolf seeks its victim. Both using the rabbit blood as their guide. In reality, wolfs bring pain and death to rabbits. It is something that is necessary for them to survive. Though as a metaphor there is a parallel between it and the violence that people inflict on each other and the possible emotional and mental states someone would need to be in in order to commit such an act.

More often than not, my recent work is a depiction of someone -an anthropomorphized thing- dealing with either physical or emotional pain. Wolf Tickets though deals with the act of inflicting pain rather than the -often solitary- experience of dealing with the pain that had been inflicted. It is an unfortunate reality that human relations too often turn violent, though for many different reasons. 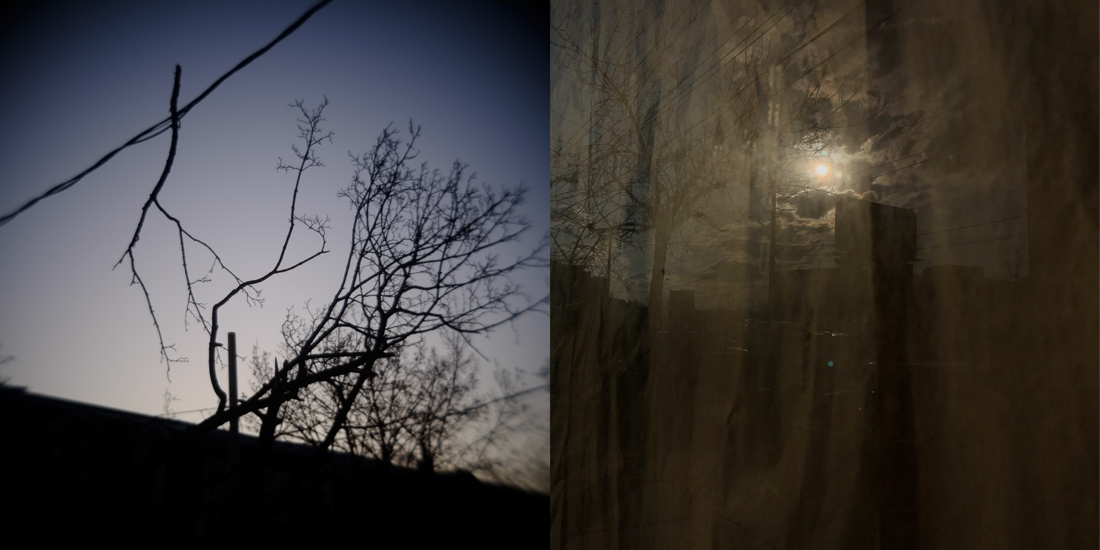 The snow stays
a crow creaks
under a shrub 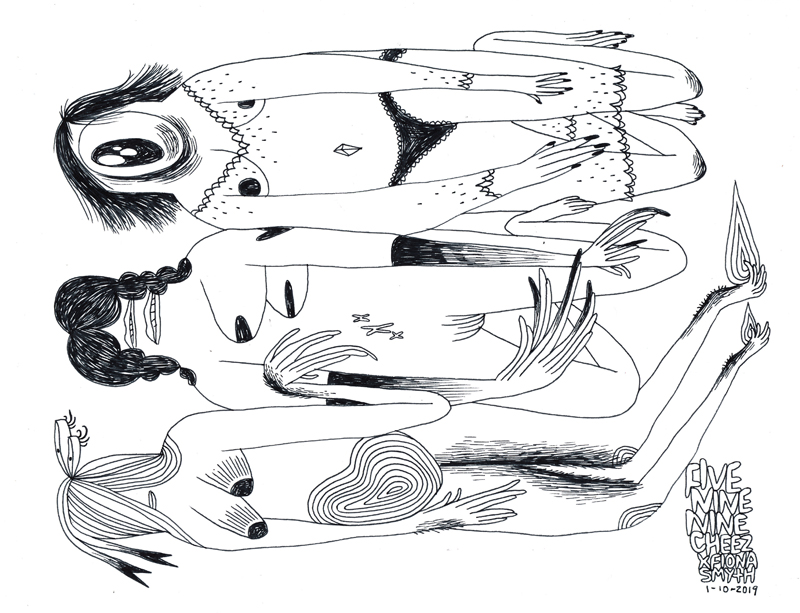 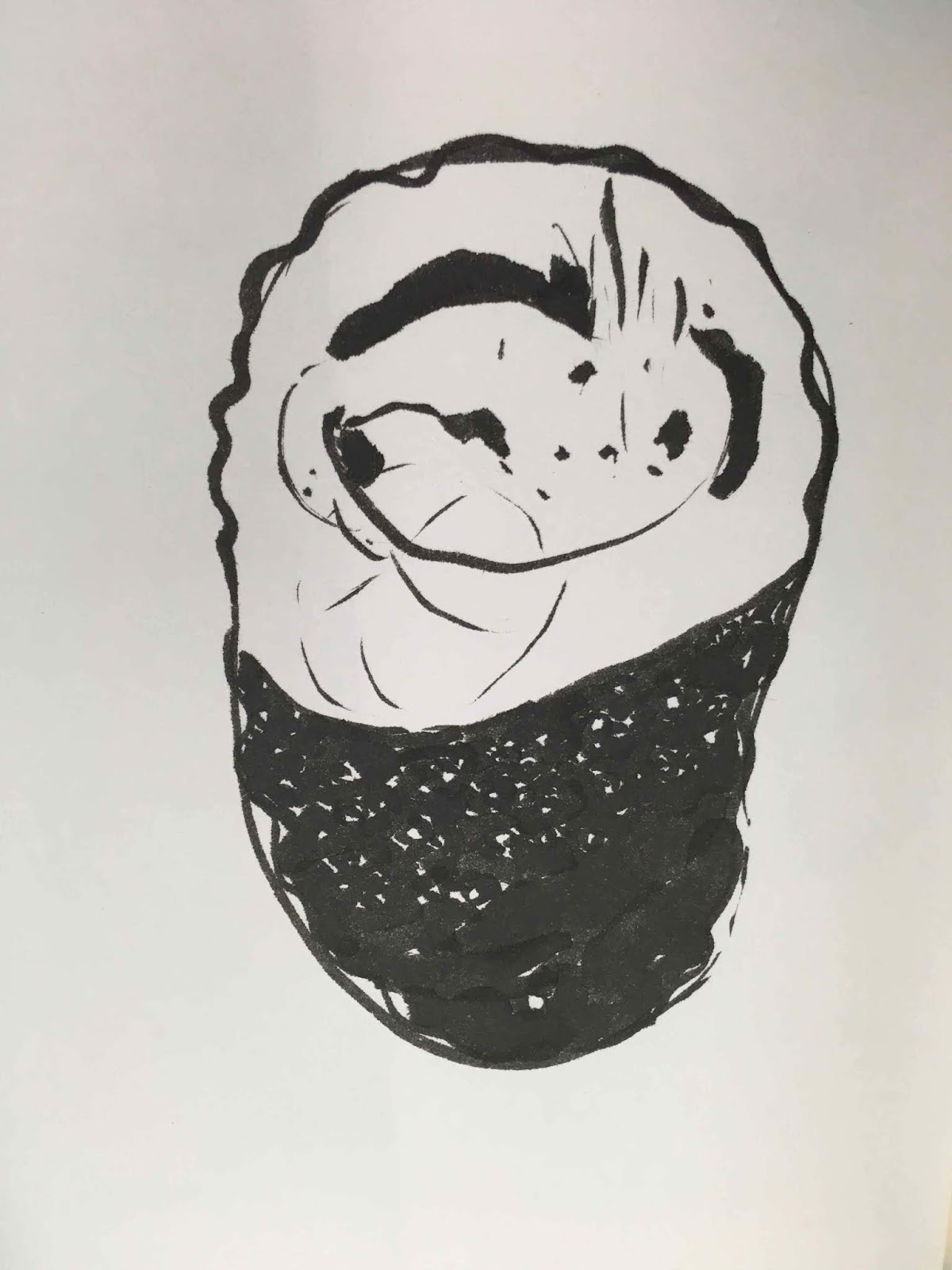 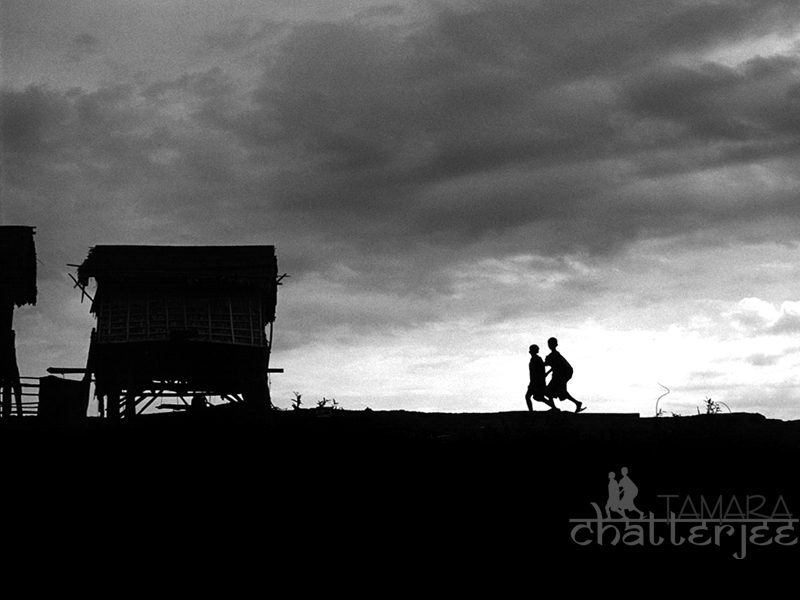 Cambodia (December, 2002) – We spent an afternoon hightailing it along Tonlé Sap Lake; the three dames filled with excitement and wonder, watching the shoreline while daily life passed... we skiddooed away.

Recently, his hitherto highly private, indeed sepulchral, career as a painter had somehow begun to gather modicum of interest, and now an art magazine had dispatched a photographer to take pictures of his recent work--and, worse luck--of him as well, often posed (though he protested only as vigorously as was consistent with getting the job done) in front of his work.
"What's this one called?" asked the beleaguered photographer, fiddling with lenses and light meters.
"Tree With Seated Figure," he said. "From 2015," he added--as if it mattered.
As he sat there trying to be patient, he kept thinking about the delightful interchange between Laurence Olivier and Joan Fontaine in the early minutes of Alfred Hitchcock's film, Rebecca. Fontaine is trying to explain to Olivier that her father, who had been a painter, painted only trees. "Only one tree actually," she adds, half-embarrassed at the recollection. "The same tree over and over?" asks the amused and incredulous Olivier. "Yes, my father felt that when you had happened upon something perfect, you should stick with it!"

In its sixteenth years, Come Up to My Room - the Alternative Design Exhibition created and produced by Gladstone Hotel occupies all four floors of the building. I must admit I haven't seen the exhibition since I last wrote about it in 2006. I had two impressions then, which lasted up to this day. One, Bruno Billio's room and the pillars of books piling up all the way to the ceiling. Second, I met the elevator operator Hank Young, who is also known as Hank the cowboy. He died in 2009 at the age of 68.

Today I still find Bruno Billio's studio at room 209. Billio has been the resident artist at the Gladstone Hotel in Toronto for the past 16 years. For his 16th CUTMR he has transformed it into a living room magically lit, and furniture outlined with neon lights. It feels flat, 2-D and unreal. Like walking into an animation or a video game. Coupled with loud music beats it really has created some excitement. He called it TRON209.

With or without Hank, there is no one now to operate the elevator, and visitors are encouraged to climb the stairs, to discover artwork between the floors. There are not a lot I can remember. The ones that still occupy some of my brain space are captured in these pictures. Penumbra by Chromatic Aberration | Studio 206
Combining their craft, they seek to create narrative through shadow, interaction and sculpture. Eastern Bloc (Collapse) by Georgina Lee Walker & Youri Makovski | Studio 204
I am quite fascinated by their creation of fabricated ‘carpets’. They are based on original rugs, from Iran or Europe, altered and reproduced by machine. The material is made of latex. Fraktur by [R]ed[U]x Lab | Studio 206
Created by a collective of designers, Fraktur explores expansion and contraction and how they can make a static room feel alive. 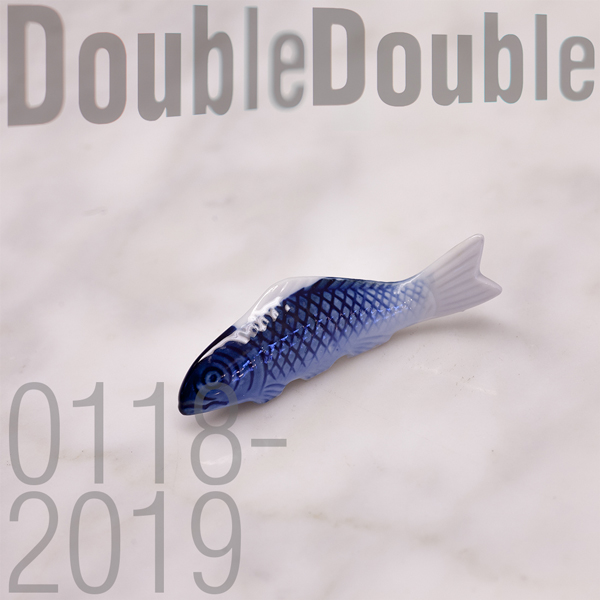