Foodscape was a major collaboration I worked with my poet and writer friend Leung Ping Kwan (1949-2013). The inauguration of the collaboration was an exhibition held at ARTSPEAK gallery in Vancouver in March of 1997, as part of the programme for CITIES AT THE END OF TIME: HONG KONG 1997, which brought together artists and writers from Hong Kong, Canada and the U.S. to present works that explored the cultural and social identity of Hong Kong. The show was mounted at the McIntosh Gallery in London, Ontario in the same year.

After that inauguration, this collaboration project was further developed and exhibited in other cities: at the Goethe-Institut, Hong Kong (1998), at Rou-un-ki Aki-ex Gallery, Tokyo (2000), at Ruffini Kultur, Munich (2000) and in 2004, there was a larger exhibition at the Hong Kong Heritage Museum (with guest artist Millie Chen).

In the first chapter of Foodscape, in two sets, ten works were made, each image being 30 x40 inches, in inkjet on canvas. Unfortunately, the exhibition set was somehow lost when returning from Canada after the exhibitions abroad. These early inkjet prints were not as archival as today's materials are. I am planning to issue a new set of editions in the coming days. In 1998, a small number of black and white gelatin silver photographs were also made, with support from AGFA, part of their help in producing diamond screen digital negatives. 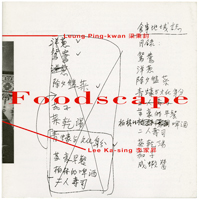